Tweedle Dum and Tweedle Dumber: How Smart Do You Sound?

I suspended a sign from the ceiling in the main hallway of an agency I ran that announced, “The better directions you give us, the faster we get where you want us to go.” It was mutually inclusive – both clients and agency staff learned to be better at expressing themselves with absolute clarity.

The digital age has tossed that concept out the window. 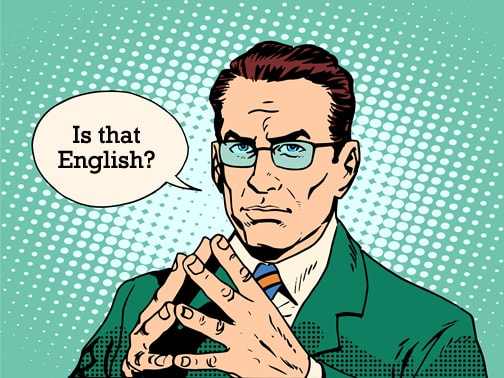 While contemporary jargon is a sure sign that a language is alive and evolving, some things deserve early extinction. Or, at the very least, a limited range. Pronouncements such as “Gentlemen must wear jackets” or “No shirt, no shoes, no service” need a brand-related, linguistic equivalent, even when it’s inside the company.

Lots of actions can make a firm look stupid. Harassment litigation, wage discrimination, environmental damage, and other headline-worthy malfeasance. Yet, on a day-to-day basis, it’s what you say that defines who you are. Sometimes in a good way, sometimes not.

Apparel, extreme sports, computer games, and television news and talk shows all have a lingo of their own. For people who buy the latest fashion, engage in life-threatening competition, and play the newest version of Minecraft, there’s a vocabulary they rely on. Outside those realms, terminology may not translate.

“Shredding” describes things that have to do with snow and with paper and, in context, they’re both well understood. But when a ski resort employee says she has to do some shredding, what is she talking about?

So, whether it’s a product plan, a creative brief for an ad campaign, or directions for driving from Maine to Nebraska, terminology has to be accurate, not argot. And what’s "wicked" (good) in Maine is "wicked" (bad) in Nebraska, a difference that simply requires crossing a few state lines. Across international boundaries, other problems arise.

If you market and sell in America, British idioms may not work. This is where television news and talk shows come in. If U.S. viewers hear a phrase from a person they trust, they tend to believe that the phrase is correct. Take “go missing,” an import from England. The Brits may be accustomed to it, but it’s just plain dumb. That’s because “missing” is a state of being (or not being, actually). It’s not a journey. You can vanish or disappear, "go fishing" (an activity) or "go crazy" (a transition from sanity), but you can’t "go missing." If a secluded resort were to run an ad that says, “Go missing this weekend,” it could, using contemporary parlance, imply foul play.

A project that isn’t successful is a failure…unless you’re in computer programming or gaming. Then it’s “a fail.” But if you test market a new product or service, and it doesn’t catch on, it may have failed to create demand, but no qualified trade journalist will say the effort was “a fail.”

Dodos didn’t “go extinct” anymore than typewriters “went obsolete.” They became those things. Yet, if language clarity becomes extinct or obsolete, we might as well relive Babel.

It was in Babel that people, because they had a common language, seemed capable of accomplishing anything. So God, working in the usual mysterious ways, imposed multiple languages for one express purpose – to keep them from achieving great things that might rival “acts of God.”

There’s a lesson in this for businesses that need to have the broadest appeal, sound smart while doing it, and avoid having to hire people who, like simultaneous translators at the U.N., can convert colloquial babble into English-as-a-known-language.

Have You Forgotten Me? Six Key Techniques to Maintain Your Network