A colleague of mine who I will call “John” successfully negotiated a highly favorable executive relocation and compensation increase from his Fortune 100 technology and communication company who wanted him and his family to move to Singapore. In a global economy that continues to send mixed signals into the market, John secured everything he wanted to maximize his personal reward. I asked him to explain his strategy and I am pleased to share his top four recommendations as best practices.

1. Negotiate early. John began the negotiation process to relocate his job and family to Singapore nearly 15 months before his target move date. Through formal and informal conversations with his direct manager (an Executive Vice President) and the head of his group (the President of the company), he planted seeds in their minds of the potential value he could add to the organization by shifting his focus from North America to Asia Pacific. In John’s case, he knew that there was a high likelihood of support for his move, and he made a very conscious decision to influence decision-makers early to solidify the notion that it was their idea, and not his, to move him to Asia. 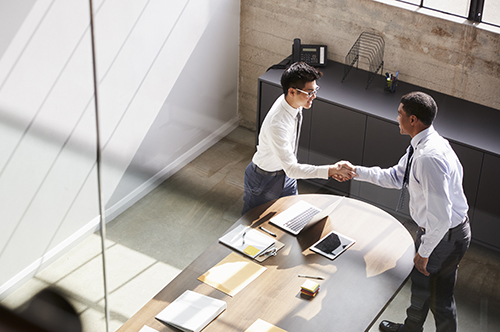 2. Issue the opening salvo. After about 3-4 months of discussions, John presented a formal proposal, a first draft of the terms and conditions that he would find acceptable to uprooting and relocating his family to Asia. In his document, he clearly spelled out specific items and provided the evidence and reasoning for why each term made sense. For example, in order to agree to move, John calculated the minimum cost of living adjustment that he would be willing to accept by demonstrating his firm understanding of the new market he would be entering. Employers know that no executive should ever accept a standard of living below his current state, but that does not stop them from trying to low-ball when they may get away with it. By making the first move, John anchored the negotiation to show that any amount below his minimum threshold to cover new living expenses would be a non-starter.

3. Define your deal-breakers. In addition to a housing cost adjustment (and hence, a salary increase), John sought a change in title to reflect the scope of the role he would be assuming in Singapore, and six months lead time to ensure a smooth transition for his young family. Two of these three conditions were considered deal-breakers for him, and he made sure that the company only knew it when push came to shove. During the negotiation, the company appeared most willing to include the housing adjustment and timing John wanted, but could not guarantee any promotion until year-end. John applied a classic negotiation tactic to concede on a less important issue to him in order to get what he really wanted.

4. The answer is never really “no.” John understood that he was negotiating with a corporation, not an individual. When individuals say “no” on behalf of the organization, John knew that the answer wasn’t really “no.” When he first asked for the housing adjustment to his salary, the HR contact immediately responded by saying that the company “will not accommodate” such a request. Anticipating this response, John re-asserted that a housing adjustment was a pre-condition for him to move and suggested HR to speak to his group head and company President. HR later came back and confirmed that management agreed with John about housing and included it in his final package.

The key takeaways from John’s negotiation center on striking early and often and holding firm on what you value the most. However, it is important to bear in mind that none of this would have been possible for John if he were not a top performer. John maintained his leverage by staying on top of all of his responsibilities and proving his value and worth to the organization time and again. The minute productivity dips and seeds of doubt get planted, expecting to win an attractive raise or gaudy relocation package immediately goes away.

Relocation is a great way to add talents to the company and must be encouraged frequently. It is a win-win scenario for both the company and the employee. First, for the employee, it will help to add diverse group of talents to its existing workforce. It will bring fresh thinking to solve business problems, achieve growth. It will bring more loyalty, commitment from the new employees. New employees would take time to settle, understand the new place, new culture, adjust to the new workplace, country. By that time 5-7 yrs would be gone and employer would have recovered the cost and made profits. It would bring new leaders to management, strategy, provide long term growth for the company. It would provide new residents, citizens to the country adding growth to economy. For the employees it would provide great career, opportunity to work in new country, achieve growth, gain new residency, a whole lot of growth. Relocation done the right way is good for both the employer and employees. I benefited from relocation once. Looking forward to one more relocation as and
when this happens.

Relocation of Executives to SIngapore by Francis de la Cruz

In that article, "John" is personified as a successful executive for the corporate mission at hand in Singapore.
It also says how dumb the company was and the short sighted President who gave the generous package for his relocation. Singapore is no hardship place - its a heaven for all these less than talented executives. I seen through 2 foreign CEOs to know that! I read about the many who failed to add value bigtime in the past decade and half - some on large public listed companies and some will be 5 years on from hence.
The real deal are the likes of Quek Leng Chan, Ooi Hong Leong, Wee Cho Yaw et el .. they know whilst a majority of foreigners pretend to know. So, bosses, be aware of your fallability to swet talking subordinates.

One of the biggest issues is how he is treated when he completes his/her overseas posting. As the majority of expats often leave the company shortly after relocation back to the States, the "next step" question needs to be adequately addressed. What you don't want to suffer is taking an assignment on behalf of the company only to find out you will not be considered for other assignments and or promotions when you eventually return. Expats are 2-3 times more expensive than local hires but most often do add value and perform well, but do need to return and ideally be replaced by a local hire if possible..