As the world’s 11th largest country, 15th largest by GDP and one of the most open economies globally, business in Mexico is making it an emerging giant in the global marketplace rife with opportunity. Most US and European multinationals operate in Mexico, as do some from Asia. The country has produced its own multinationals and multilatinas and incubates flourishing start-ups from across Latin America.

With Mexico’s 2018 presidential election in sight and evolving trade agreements, we at BlueSteps and AESC wanted to better understand business in Mexico at this pivotal moment. We spoke to executive recruiters from AESC member firms and executives operating in Mexico to get the pulse on the economic and business climate and its effects on executive opportunities. 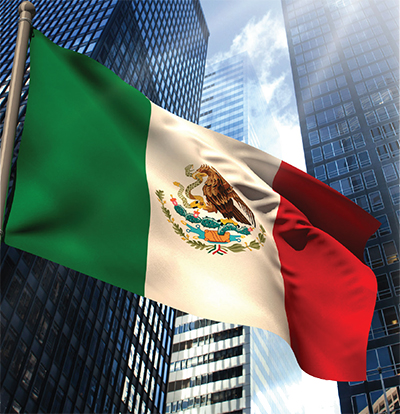 What we found was an environment of some short-term instabilities, but major long-term wins. It’s clear from our research that Mexico will continue to grow as a business force well into the foreseeable future and will present promising opportunities for top executive talent.

The Economic Climate: Political Uncertainty’s Effect on the Marketplace

It’s impossible to talk about business in Mexico today without discussion of Mexico-US relations and what some refer to as the “Trump Effect.” This term has come to describe the rhetoric President Trump used about immigration policies and the terms of NAFTA throughout the election in 2016 and into 2017. When we spoke to AESC member executive recruiters after the US election, currency devaluation was a major concern. But as the months have passed, the mood has lightened. “Now that Trump’s economic policies are clear and his approach is clearer, the situation, the exchange rate, for example, has stabilized,” said one recruiter in May of 2017. By early summer, the peso bounced back out of its Trump slump and, at publication, is the world’s best performing currency this year.

“For the record, there’s not as much uncertainty about Mexico-US relations as one would think,” said another respondent, “in Mexico, there’s much more uncertainty about our own election.” In July 2018, Mexico’s citizens will cast their votes for a new president. Mexico has been led by either center or center-right governments throughout NAFTA’s more than 20-year history. Business leaders are concerned that a shake-up in political policies could cast more uncertainty on trade. Like in the US and the UK, there is a new current of populism spreading in Mexico likely to impact elections. Early indicators are that Mexico’s new president could be much more partisan. The potential impact of a new government on the Mexican economy and future trade agreements is creating uncertainty and market instability. “The market is moving again compared to three to four months ago where companies were keeping things on hold…things are now being perceived in a more positive way,” said a recruiter, “[yet] politics are really contaminating the rest of the variables.”

Despite the continued political uncertainty having some impact on the economic and political climate in Mexico, there does not appear to be a threat to long-term investment in Mexico. “What we have learned from many of our clients is that they have long-term investment plans for Mexico and whatever happens in the short term, won’t change that,” said one consultant.

The State of Business in Mexico: A New Silicon Valley?

Mexico’s economy has been accelerated by the Aerospace, Automotive and Pharmaceutical sectors over the past two decades. While some manufacturing strongholds in Mexico such as clothing manufacturing, for example, have shifted to Asia in recent years, technical manufacturing such as Medical Devices, Appliances and Electronics manufacturing continues to thrive. The Consumer Goods sector dominates in Mexico and Retail continues to flourish, with consumer confidence recovering months after the US Presidential election. The Technology sector is growing rapidly, with a tech development boom happening in Mexico’s Jalisco State in part due to the US political climate. Mexico and Jalisco are capitalizing on potential US immigration policies, and Mexico to boldly thrusting itself into the digital marketplace by becoming a hub for start-ups like those in Silicon Valley. One executive search consultant described the climate as being similar to the Dot Com era of the late 1990s.

Mexico trades freely with 45 countries, resulting in more than 90 percent of Mexico’s trade occurring under free trade agreements. Its global openness makes it a desirable place for companies to continue expanding their organizations into, invest in new start-ups, and for local companies to expand. With the environment becoming more complex and new growth opportunities for companies, the need for executive leaders is stronger than ever.

Executive talent prepared to lead is in short supply, causing current business leaders to become increasingly concerned about business continuity. There are not enough successors ready at the helm within many sectors and industry leaders are looking to develop their talent pipelines. One CEO in the Technology sector commented, “We are the local representation of an international company. Having the best local talent to advance our mission and lead our business in Mexico is an imperative.” A CHRO in the Chemicals industry elaborated, “in our company, the average number of years at senior-level is 22. We need to bench with bilingual, young talent.”

Today’s C-suite leaders in Mexico also understand the imperative to be agile and able to read and act upon new developments and market conditions. Be it geopolitical developments or changes in the foreign exchange rates, leaders need to assess the situation and respond faster than their competitors to gain the competitive edge. “The world is changing and new business models are surfacing in a faster than ever changing environment that requires a new kind of executive,” stated a CEO in the IT Consulting industry. “With a changing world, it’s easy to run behind the curve,” added another C-suite executive.

Leaders of business in Mexico are also looking for new talent that can drive innovation. “Our competitiveness is based on innovation and technology. The next generation has to have the skills and knowledge to perform in a different business environment,” stated a CHRO in Professional Services. With innovation at the forefront, many companies in Mexico are looking to next generation talent step up into leadership roles and bring digital expertise, diversity and adaptability the organizations will need to thrive. To help this change along, succession planning becomes ever more critical for today’s organizations. “It’s important to count on diverse, future executives. They will inherit our responsibilities and develop new strategies for our future and ensure our sustainability,” commented a CHRO in the Financial Services sector.

Moving Forward: How to Develop Your Career Plan

The Perfect Pitch: An Executive's Guide to Selling Yourself & Getting Noticed