Over the last five years, I have had the pleasure of working with and career counselling some of New Zealand’s leading lights in terms of Board Members, C-suite executives and IT technicians. This extraordinary experience has helped me garner a greater understanding of my industry and opened my eyes to new perspectives of how people from all corners of the globe operate in a business environment. One point that has always particularly fascinated me however, is how the southern hemisphere measures up to its northern counterpart. In many respects, there is negligible difference in business ideas and performance, but that’s not to say that there doesn’t seem to be some small element of playing catch up when it comes to corporate structure. What I mean by this is in reference to the New Zealand equivalent of the CIO role – the woman (or man) with “An assortment of hats…irrespective of the job title” as one leading light I was lucky enough to interview commented on their position. I was intrigued learning of this phenomenon over the last half decade: the idea that the Kiwi Chief Information Officer needs almost to be an every-person in everything, as CIO Online stated in 2012, “Business planning and cyber security to robot management and, of course, the cloud”. Even then, the article suggested that CIOs can “Expect their jobs to change dramatically by 2020” With how quickly Technology and roles are changing I wanted to investigate what 2018 had in store for this seemingly jack-of-all-trades C-Suite operative. 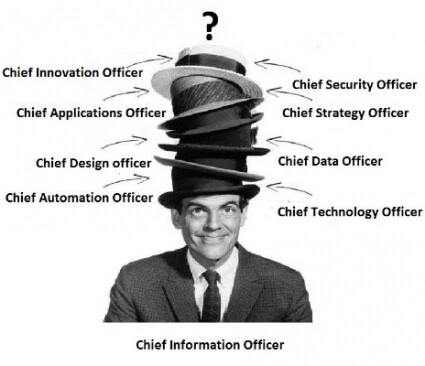 Through my interviews I was hearing rumblings of discontent from numerous CIOs, Why?

To frame my research, I decided to get in touch with 214 New Zealand CIOs to get their opinions on which way the wind is blowing for 2018.

With the new additions of Chief Officers did the companies that Kiwi CIOs work in have the following individual roles?

Or do they just take up the slack and add the responsibilities of the above roles to their CIO role? The Harvard Business Review of July 2017 offered that “Digital disruption is rewriting job descriptions…especially for the CIO” and this view seemed also to be advocated from my respondents. One idea which seemed reflective of the majority of my interviewees was this:

The rumblings I had heard was described by one CIO:

The goal of most organizations seems then to be the utilization of CIOs in order to “Deliver significant returns fast enough to meet the shrinking window of opportunity” (Forbes, June 29th 2017). This implies companies are searching for means of rapid expansion in an almost technological arms race environment with every competitor in the industry. Does this come as any surprise to any outsider looking in? Not really. The business world is, and has always been, fiercely competitive and the top predators in the food chain know that aligning the right technology to a company can be the difference between becoming architects of the future or being trapped in yesteryear. Nobody wants to be chisel and stone in the age of the supercomputer.

Given the high pressure placed on the performance of a CIO, how do we then resolve issues of discontent to give the most to the individual in order to get the most from them? The more enlightened companies realize that “Too many hats”, as I mentioned earlier, does nobody any favors. A burned-out CIO can’t perform the job they love and that means businesses suffer. Effectively reassigning the ambiguous roles and responsibilities of the CIO role to other appropriate C-Suite executives is a huge start. Other than this, Forbes suggest the following streamlined focuses for the CIO in order to get the best from the best:

For some Kiwi CIOs, the job that they love is becoming all-encompassing and has started to consume their enthusiasm and ultimately their ability by wearing so many hats. This is not looking good for the CIO in 2018 as it will affect their work, which will result in companies ultimately losing out. Disaster for CIOs in 2018.

I wholeheartedly believe that Kiwi CIOs, especially those that I have met and those out of the 214 who responded to me are constantly willing to take up the slack in order to guide their ship in unchartered waters, are exceptional people.

One particular CIO I am grateful to know is easily arguable to be the most giving person to their team and company: an inspirational servant leader and a person that many have wanted to work with in any capacity just to be a part of their team.

So how do we advert to the possible 2018 CIO disaster?

Isn’t it time we supported these sorts of ground-breaking CIOs? It’s time we let the CIO show off their stuff in what they have mastered and see other shining business people tackle the challenges of new roles in the technology sector.

A lot of executive teams and boards need to start understanding technology as it’s up to everyone to understand what technology can do for a company. Only then, will there be any chance for companies to find the harmony that they are desperately looking for.

Eligibility: This giveaway is open to those who are 18 years of age or older. Employees of BlueSteps and their immediate family members are not