Is Your Network Powerful Enough to Find You Your Next Job?

It can be a challenge for many senior level executives to muster the time and energy needed for building and maintaining their professional network. But without a robust network, executives put their careers at great risk by neglecting this vital aspect of career contingency planning. Executives hoping to safeguard their careers and improve their career trajectory must have a network in place before they come to rely on it for finding their next role. Like the Chinese proverb dictates, you must dig the well before you are thirsty, and executive networking is no exception. 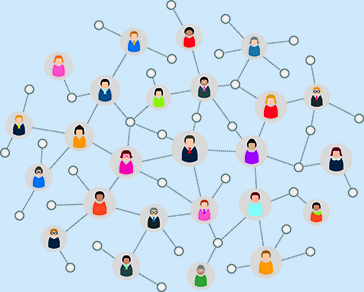 As effective executive networking can be difficult to master, BlueSteps has provided the following key insights to help you on your way to success.

Define Your Network and Targets

Before reaching out to new potential contacts, take stock of those you know already and which existing relationships could be potentially revived and strengthened. Make a list of work clients, co-workers, friends, relatives, search consultants, co-workers from previous roles, and anyone else who you could incorporate into your new strategic networking plan.

Once you have rekindled any useful relationships who could be helpful to you in achieving your career goals, consider if there are gaps in your network community and identify who you would need to meet to reach your goal. Once you have created your targeted plan, you can then begin your wider professional outreach.

Networking Should Be a Mutually Beneficial Exercise

The most effective and successful networkers are those who put into their network as they much as they are hoping to take out. Learning how you can help your network is imperative in order to reap the rewards. People remember those who help them and will be more likely to return a favor in the future. There are many ways to extend your services to those you network with. Put a new connection in contact with someone in your network who could help them achieve their goal, or when an executive recruiter calls at a time when you are not open to job transition, rather than rejecting the call, you could recommend someone within your network instead.

Impactful networking is consistent and targeted.  Many executives often get to absorbed in the day to day activities of their demanding jobs and lose sight of the big picture impact networking can have, ultimately losing contact with many valuable industry connections. To avoid this pitfall, executives should routinely schedule time in their calendar to maintain strategic relationships. Social media can be an effective way to manage and keep track of connections with minimal effort. Whether you prefer email, LinkedIn, Twitter, or Skype, once online networking has been built into your weekly or daily routine, it will become second nature and your network will flourish.

It’s important to experiment with a variety of networking strategies to see what works best for you, or if a combined approach between online and offline networking is more effective. In-person networking can be a great way to forge in-person relationships that can then be nurtured further online to strengthen the relationship and arrange to meet again.

When attending in-person events, top advice would include: asking the event organizer to make key introductions, arriving early to make the most of a smaller and less daunting crowd, avoiding clique conversations and questions, being genuinely interested in the other person and not immediately launching into your own career story, and ensuring you follow up post event.

After obtaining your next role…

Once you have transitioned into your new role, your networking plan should not stop there. Although you might want to reduce the hours you spend networking each week, it’s important not to become complacent and to maintain these relationships throughout your career.

Even the smallest amount of time invested in both online and offline networking can really help to advance your career and should not be overlooked. If you would like more helpful advice on executing networking, watch the recording of our webinar “Let Your Network Find Your Next Executive Job.”

Become a BlueSteps member to watch the webinar >>

Workshop: Networking Advice from the Experts