The Trump Administration’s Travel Ban: Will the Aftereffects Close Doors or Open Them?

When a White House policy is broad enough to affect both computer programmers and NBA players, it’s a remarkable decision. Yet that’s the impact of the executive order (EO), nicknamed the "Muslim Ban," that bars citizens from seven Middle Eastern countries from entering the United States. The order’s Constitutional legality will be decided by the courts, but what won’t be decided, in the short term at least, is the impact that the EO has on how and whom American businesses hire.

As reported in Sports Illustrated, two Sudanese NBA players have been advised to remain in the country, and similar advice is being given to foreign nationals who hold any type of employment visa. Even those with dual citizenship from Iran, Iraq, Libya, Somalia, Sudan, Syria, or Yemen and a Western country have cause to worry. That’s because the EO is imprecise enough in its directives to give customs and border officials broad discretion – on a case-by-case basis – in determining what to do.

According to Catherine Haight, whose Haight Law Group specializes in employment-based immigration law, “The language of the executive order is unclear, leading to worry by U.S. businesses that they won’t necessarily be able to hire the best and the brightest from around the world.” That situation may be compounded if the visas themselves are modified or the number issued is reduced. H-1B visas (for those with university degrees) have been in certain politicians’ crosshairs for years. That’s because opponents see each H-1B visa as a lost American job. But is that accurate?

According to a report from the Organization for Economic Cooperation and Development (OECD), U.S. students are far from the top in their math, reading, and science skills. So, if American companies want to remain competitive, they’re likely to open their doors to people from Singapore, Hong Kong, Taiwan, Estonia, and Finland, all of which rank higher than the United States. By contrast, eight American universities still rank in the world’s top ten, attracting the best students from around the globe, yet there’s a dichotomy, as I explain below.

The level of education in the seven primarily Muslim nations rank below the U.S., but that doesn’t mean there are no qualified candidates with advanced expertise – candidates who may be unable to utilize their skills in war-ravaged economies. And if they can’t come here, they may take their talents to non-U.S. companies that compete with American firms.

The advice from law firms like Littler Mendelson (in its ASAP publication dated January 29, 2017) is that “foreign national employees from the seven banned countries should avoid international travel, especially those attempting to enter U.S. territory within the next 90 days, because their admission may be denied.” Similar advice is offered by immigration attorney Jason Finkelman who believes more EOs related to foreign-born employees are likely to be issued.

Workology’s Jessica Miller-Merrell envisions visa alternatives and the training of domestic workers. Ironically, corporate-sponsored training programs, particularly for potential future employees, were a staple of employee development in this country for decades. Companies that relied on engineers, scientists, and mathematicians sponsored school-year and summer programs that introduced students to the practical applications of what they were learning in school. That declined in the 1990s as student enrollment in STEM degree programs fell, persuading companies to look abroad, literally and figuratively, for qualified employees. 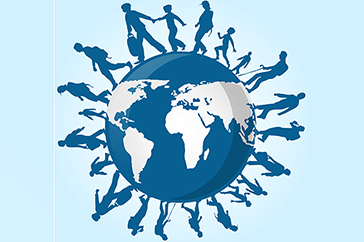 The figurative aspect reflects the dichotomy – many of the STEM-degree students came from overseas to study in the U.S. If they’re forced to leave after getting their diplomas, several things may occur.

Ms. Haight also sees the potential for U.S. firms to hire workers overseas and, if they can’t come to the states on an L-1 or H-1B visa, have them work for foreign-based affiliated companies. Presumably, that would include working in overseas offices of U.S. firms. For foreign nationals who are currently employed here, Ms Haight is already seeing a change. “People are pushing forward with green card applications and accelerating their efforts to obtain U.S. citizenship,” she says. “There’s an uptick in activity among U.S. companies to protect their employees and provide stability – for the business and the workers.”

The Good with the Bad

That’s providing more work for law firms that specialize in immigration and employment, but it’s not resulting in clarity about administration policy. That’s still a moving target and is likely to remain so until the courts resolve the issue.

In the meantime, some individuals are choosing to stay away, rather than attempt to run the gauntlet of visas and vetting. Equating hard-liners in his own country with those in the U.S., Iranian filmmaker Asghar Farhadi, whose motion picture is nominated for Best Foreign Language Film in the upcoming Academy Awards, has decided to stay home in Iran, even if an exception to the ban would allow him to attend.