Management Styles: The Way You See Yourself and Others See You Are Poles Apart

What constitutes good management? How do you nurture employees in such a way as to ensure that they contribute maximum value for the company? One thing is certain: More often than not, appearances and reality are worlds apart. A study discovered that managers rate their own style far more highly than specialists perceive. Angela Westdorf, Managing Partner at Signium Germany, shares her views on how bosses can solve the dilemma and why a directive management style is outdated. 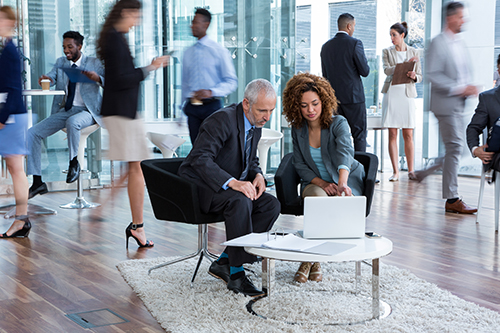 Managers should be charismatic, act as role models, convey their vision, motivate people, promote an independent approach and have confidence in how each individual performs. So, say the specialists when describing what makes an ideal boss. What’s more, many managers think they have all these boxes ticked. Undeniably however, the reality they achieve and what they target are very different. When questioned in a survey, most professionals responded that they were being managed with a top-down approach, whereby the employees concerned were tasked with duties and expected to carry them out precisely as instructed. In German companies, this patriarchal style still holds sway. Moreover, one in five study respondents stated that they were monitored on an ongoing basis, then rewarded or penalized according to success or failure. “Superiors should get regular feedback from the employees they manage to find out how their management style is perceived,” advises Angela Westdorf, Managing Partner at the international executive search and leadership consulting company Signium Germany and Vice-Chair of Signium’s International Board of Directors.

“If the feedback from the team is worse than expected, there are numerous ways to help mitigate it,” says Westdorf, who places clients in leading life science industry positions worldwide, including pharmaceutical and medical technology companies, diagnostic companies, laboratory chains, biotech companies and private clinic operators. “360-degree feedback, which superiors, peers and employees alike can use to assess competencies, reveals accurate pointers to indicate professional and/or personal weaknesses”, Westdorf says. During day to day work as an Executive Search Consultant, what she often hears is episodes of specialists rejecting superiors because they cannot learn anything from them, and that they disapprove the style of management. “But where excessively authoritarian management exists, there is scope to ease off and make things freer by making more use of project groups,” Westdorf says. However, the study also showed that an overly lax approach was just as unpopular with staff.

“A good boss points the way forward and promotes individuals based on ability,” emphasizes Westdorf. “Senior managers who excel should be like the finest conductors, directing ‘the orchestra’ to give their very best end product. This is the key to business success,” she adds.

“Managers keen to shore up areas they need to improve can seek out sounding boards within the company – ideally a colleague from another country and another division; familiar with the company and knowing what makes it tick,” Westdorf suggests. “Response from a neutral source, conversely, can come from external trusted parties within the company’s network, who will be tasked with overcoming similar challenges in another company. Last but not least, coaches can showcase ways to improve the management style in a manner that boosts employees – and more often than not, business success as well,” Westdorf explains.

Westdorf advises against settling for one-off feedback: “Regular 360-degree feedback keeps managers up to speed with the prevailing views of their employees, because the surveys only tend to motivate people when something changes for the better.”

Given the shortage of skilled workers, which demographic developments in Germany are set to exacerbate even further, the Executive Search Consultant considers it crucial to gain brownie points as an employer with a good management culture. A 2016 study published by Signium entitled “How to attract talent today!" revealed that the superior is the key player when the final decision on whether to approve or reject is made. Almost half the respondents cited personal chemistry with their future boss as the number one factor.

According to Westdorf, change management is one of the top priorities when it comes to clients’ present-day search profiles. “Amid a corporate environment of uncertainty, volatility and dynamism, managers need to be absolutely on board with the decision to change; something which also dictates the extent to which they can bring teams with them en route to such change,” she adds. According to Westdorf, the Novartis Group is a good example of a company negotiating ongoing change and maintaining its trajectory within rapidly changing markets. “Following an initial focus on patented medicines, Novartis went on to develop a total of six businesses, three of which remain intact to this day, with one more due to be floated on the stock market in the near future,” she says, and adds that a solution-oriented approach is also needed. “Where a successful company stands out is not only in terms of its products, but – above all – through its complementary individual services,” Westdorf explains, and says that nimble executives are those successfully nurturing their employees in this direction.

According to Westdorf this can only work if managers are visionaries, whereby each individual sees the bigger picture and understands exactly what they are doing and why, which brings home the significance of their work to them. “As it happens though, numerous bosses act as if within an ivory tower, failing to communicate and thus failing to convey the importance of performing such and such a task,” says Westdorf. Even so, anyone who succeeds in conveying why something is meaningful, supporting independence and self-starting and thus promoting personal development, including through regular constructive feedback, will have a head start when it comes to both sourcing and – above all – retaining the cream of the crop, Westdorf adds.

Angela Westdorf is a Managing Partner at Signium Germany's Cologne office. Angela has been working in executive search and leadership consulting since 1998. Early 2018 saw her promoted to Vice-Chair of Signium’s international board. Since 2003, her industry focus has been on life sciences and healthcare, with clients including pharmaceutical and medical technology companies, diagnostic companies, laboratory chains, biotech companies and private clinic operators. She specializes in filling both national and global management vacancies or internationally oriented managerial positions. From 2013 to 2018, Angela Westdorf headed Signium’s Global Life Science Practice.

Moving Forward: How to Develop Your Career Plan

The Perfect Pitch: An Executive's Guide to Selling Yourself & Getting Noticed