Open board seats represent potential opportunities for past military leaders. But for many, the question is, “What are my chances? Will I get on a board?” This blog offers encouragement to veterans who seek board seats and challenges boards to go beyond their usual networks to consider military leaders for that next open board seat.

Every year, most public company boards add at least one new director. The way board hiring trends are going, it won’t be long until two new faces may be the new rule. This opening of the boardroom offers new hope for those hoping to get a board seat – including military veterans. 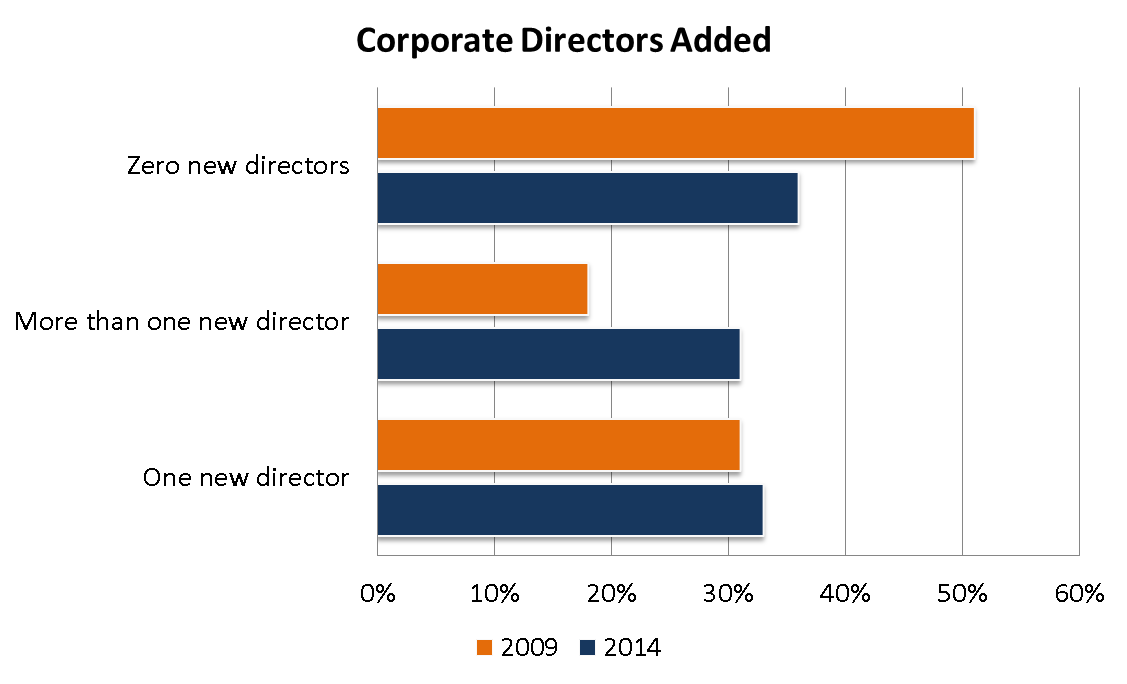 Sometimes the new directors come on to replace a director who is leaving due to resignation, an age limit, or (in rare cases) a term limit. In other cases, new directors get added simply because a board wants to expand ranks. Since the typical board size is nine (ranging from five to twelve or more), and corporate bylaws typically allow a wide range of board size in any given company (five to fifteen seats would be typical boilerplate), most boards are in such a position for potential growth. This may be good news for career military transitioning to civilian careers.

Corporate boards both within and outside the defense industry already recognize the value of high-ranking military service in all branches of the military.

All of these directors achieved the highest possible rank before their retirement, so it is no surprise that they are sought after as directors. Yet some of their peers are still waiting for their first public company board seat. Also, if these four-star men and women make good directors, wouldn’t the men and women they lead also have much to offer boards?

So the question becomes, what qualities are boards looking for in new corporate directors and where are boards finding them? 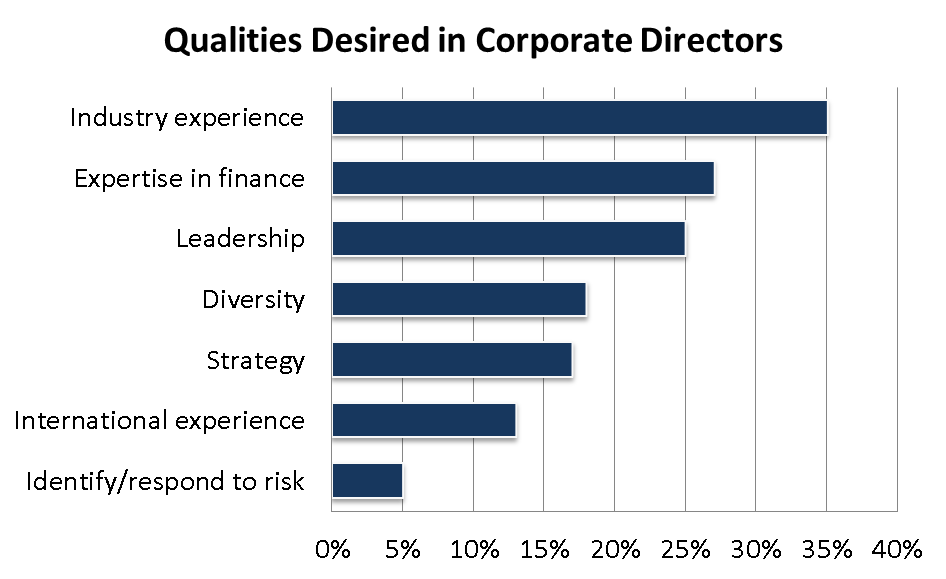 In a recent NACD survey, corporate directors were asked to select the two qualities desired in a director. The responses most often indicated industry experience (35 percent ranked in the top two) or expertise in finance (27 percent, no doubt because of this requirement for audit committees). Neither of these traits would automatically suggest a military background. But consider that the other popular choices included leadership (25 percent), strategy (17 percent), and international experience (13 percent). Furthermore, one in five respondents (18 percent) indicated that one of the top two traits looked for in the most recent search cycle was diversity. Military leadership is known to be strong in all of these dimensions.

Military leadership is also well known for its acumen in identifying and responding to risk. And while this trait was listed by only 5 percent of the respondents to the 2014 survey as a top two reason for seeking out a candidate, this trait is likely to rise along with the perception – and arguably reality – of a riskier world scene. Significantly, when asked what governance issue would dominate their agendas in 2015, a significant percentage identified risk oversight as a top choice – just behind strategy, corporate performance, and CEO succession.

How Are They Found? 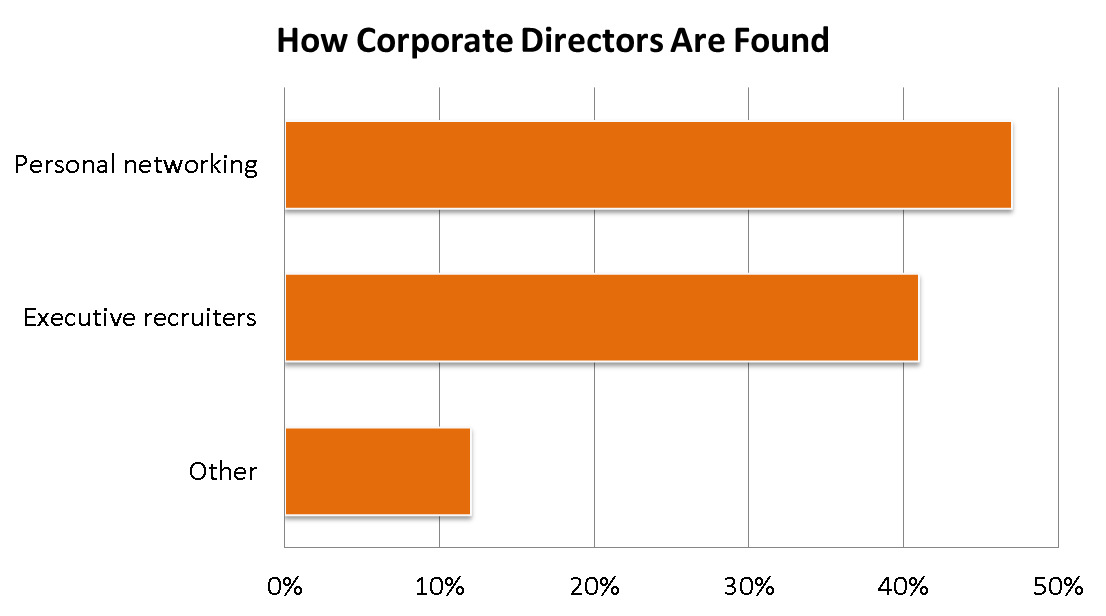 In terms of nomination sources, personal networking is the most prevalent source, followed by executive recruiters, used by 47 and 41 percent of respondents respectively. This finding may be discouraging for a career retired military veteran who has not been a part of civilian networks.

Reading the tea leaves in another way, though, the news is good. Ask yourself why boards continue to rely on personal networks to find directors. Is it because of cronyism—the infamous old boys club? In my direct and long experience in working with boards, the answer is a vehement no! The increasingly strict definitions of independence asserted by stock exchanges and by investor voting guides strongly discourage such connections. Directors use networks not so much to find people as to vet them. The question is not so much who do you know as – what kind of person is s/he?

Boards want to make sure that the candidates have good moral character, and the only way to make sure of this is to know the individual by experience. In fact, for many years, NACD used to ask about the personal characteristics boards were seeking, providing a long list of personal attributes, such as integrity, intelligence, successful track record, etc. Integrity was always such a dominant first choice that we stopped asking the question.

Why Veterans for Boards?

I would argue that a military career is a good proxy for integrity, whether or not a personal acquaintance can vouch for the candidate. Whether a person is a Vietnam era volunteer or draftee who remained with the military, or a volunteer in some more recent military engagement, the motivation to join the military is usually a strong sense of service beyond oneself – the very essence of integrity. All military personnel pledge to “support and defend the Constitution of the United States,” commitment that speaks volumes for corporate values. In the words of Army Leadership (Army Doctrine Publication 6-22), the U.S. Army’s official guide to leadership, leaders must “demonstrate unimpeachable integrity and character.”

Margaret Mead once wrote: “Never doubt that a small group of thoughtful, committed citizens can change the world; indeed, it's the only thing that ever has.” Note that his esteemed anthropologist was not speaking about just any group, but rather a group made up of thoughtful and committed citizens. If you want to find such people, look for the men and women who have chosen and lived a military career.

On February 19 and 20, the National Association of Corporate Directors (NACD) will hold its Battlefield to Boardroom (B2B) program, a corporate board Development program exclusively for military flag and general officers. By attending this program, the officers receive training that prepares them for board service. Many of the members of the steering committee are retired military leaders serving on corporate boards—including some of the leaders mentioned earlier in this blog.

NACD chief marketing officer Henry Stoever, founder of the Boardroom to Battlefield program, says it well:  “We are honored to help our nation’s senior military leaders prepare for board service.  As the guardians of enterprise value, leading directors are committed to continuous learning, and NACD is privileged to serve in this capacity.”

I had the privilege of speaking with some of the attendees at NACD's Battlefield to Boardroom program, and I can assure you that their experience closely fits the needs of corporate board leadership today. Responsible for achieving measurable returns on investments in materials, technology, and human capital ( and more); experienced in matters of global strategy and risk; familiar with leading issues in cybersecurity; and able to anticipate and respond to crisis, these military leaders have much to offer boards. Please give their candidacy every consideration. ARL

Taking on Tech: Getting Your Foot in the Door