Corporate HR and accounting departments frequently ask us: “Does employee classification really matter?”
The answer is “yes”, because the misclassification of workers as something other than employees presents a serious problem for the affected employees and impacts the US economy. Moreover, it is now especially important for all US Companies since the US Department of Labor’s (DOL) Misclassification Initiative under the leadership of Vice President Biden’s Middle Class Taskforce. Now, the DOL is making huge strides in combating this nagging issue and to restoring rights to those denied them. 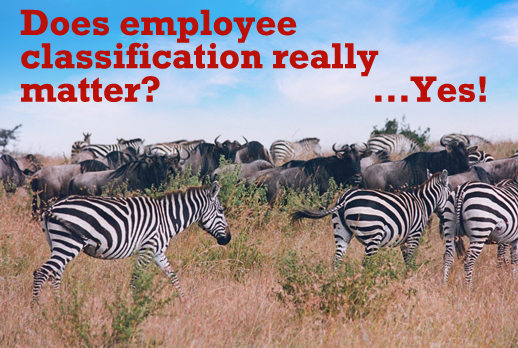 What rights are impacted by the misclassification of employees as independent contractors?
The most common problem arises when these workers are not treated as true independent contractors. Rather, the employing company controls significant, if not all, aspects of the hours worked, wages, as well as the terms and conditions of employment. The result is that these misclassified employees are denied critical benefits and protections, such as family and medical leave, overtime pay, minimum wage, unemployment insurance, paid vacation and sick time, and other benefits to which they are entitled if they were correctly classified as employees – and not independent contractors. Employee misclassification also creates substantial losses in federal, state, and local tax revenue, adversely impacts Social Security and Medicare funding, as well as state unemployment insurance and workers compensation treasuries. Also, corporations that misclassify their employees may not be paying the proper FICA and Unemployment Insurance taxes.

Some would also argue that misclassification as independent contractors by a corporation matters as some employers attempt to bolster their bottom line by avoiding the minimum wage and overtime requirements of the Federal Labor and Standards Act (FLSA). By classifying employees as independent contractors, corporations also avoid other mandated federal and state insurance coverage and other benefits to which employees are entitled.

Today, the DOL and the Internal Revenue Service (IRS) are working together and exchanging information to reduce the misclassification of employees as independent contractors to help increase tax revenue, and to improve compliance with federal labor laws. This sharing of information includes other agencies as well, such as the Employee Benefits Security Administration, Occupational Safety and Health Administration (OSHA), and the Office of Federal Contract Compliance Programs (OFCCP). Stiff penalties have been levied against companies to ensure that employees receive the protections, compensation, and benefits to which they are entitled under federal and state law.

How does a company protect itself from misclassifying its employees and the resulting hefty financial penalties? The FLSA examines the “economic reality of the relationship between the employer and the worker to determinate if, in reality”, the worker is truly an employee rather than an independent contractor. The “economic reality test” examines the following six factors the DOL has set forth in its “Fact Sheet #13: Am I an Employee?”

In summary, the focus for corporate HR and accounting teams for legally compliant classification of workers should be on whether the person is truly in business for him/herself. Focus on whether or not the person works for anyone else besides the employer. If the worker is “economically dependent upon your corporation’s employment”, then the worker should be classified as an employee, not an independent contractor. Human resources departments can also protect their companies from misclassification of workers and resulting federal/state penalties by not providing independent contractors with “misclassification evidence”, such as an employee handbook, employee badges, keys to facilities, and by allowing independent contractors to take part in employee activities of the company.

The Executive Gift Guide: 9 things every executive needs for their office

Gifting the C-Suite: Products that Every Type of Executive Needs