The Great Job Knockdown: When Will Your Job Fall?

I am a domino. It’s likely that you are, too. But whether you’re propped at the front of the line, in the middle, or way at the back will depend upon your current employment.

It is, as the pundits like to say, the price of progress: as technology advances, work changes and, often, that work goes away. It’s happened in manufacturing as robots replaced human workers (though offshoring didn’t help), and it’s moving on to white collar jobs where artificial intelligence is assuming chores that once were considered “safe for human assumption.” 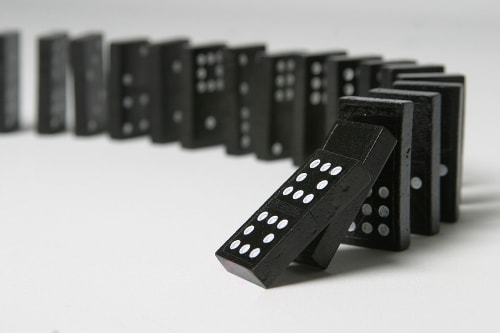 From This to That

Yet no change occurs in a vacuum. When factories close or make the switch to robotics, everyone else who relies on workers’ spending is affected – from bankers to bakers, from government to groceries. And the companies that sell and deliver goods to those businesses also feel the impact as each domino falls.

Tax bases erode as paychecks vanish, property values decline (along with property taxes) and, without the funds for schools and roads and law enforcement, people leave. It’s the same situation that creates U.S. ghost towns, even when those towns are as big as Detroit

For those who feel the comfort of a high tech career, it could prove to be only temporary. As A.I. develops, it is conceivable that software-run machines will learn from experience and re-write their code – on their own – without the need for human software developers.

When machines can create without people to guide them, where will workers find work of any kind? How will they earn enough to pay for food and shelter and the basics of existence? How will they afford to buy the output of the A.I.-driven robots? And, without the consumers, what’s the point of making anything at all?

The foundations of legal and accounting work is already being turned over to rule-based software (and updates, potentially, can rely on machine-to-machine learning). Medical research may move faster thanks to Big Data A.I. systems such as IBM’s Watson, but thousands upon thousands of medical researchers may be rendered obsolete or unnecessary.

That will reduce the need for lab equipment and the profits earned by equipment manufacturers, knocking down the domino of further R&D, of engineers who work on new technology, and of people who build it. This is not a pretty picture.

At the moment, creative professionals seem protected, but not completely. Marketing automation programs require input from writers and designers, but that input is often structured as components which the system combines and modifies based on “triggers” – how someone responds to Message A determines how the software assembles and sends Message A1. And some programs are being developed to create graphic and written content that reflects observed behavior among a firm’s target markets.

So even the “creatives” are potentially at risk, especially if the market’s sensibilities keep falling – like the discourse in the 2016 political campaign – to new lows. Where’s the domino in this scenario?

It’s a reduction in discernment among customers, prospects, citizens, and voters: with diminished education (and America’s ranking keeps falling), homogenized messaging based on the questionable wisdom of crowds (consider recent politics again), and the ability to manipulate opinions and perceptions by machine, the droids, whose information processing will be faster and whose strength could well be greater, could start running things…and they won’t need you.

Personal Branding - A Guide for Executives